All Politics Is Local

Nothing better describes the priorities and values of rural life than a newspaper headline in the latest issue of the Smithfield Times. In bold letters, the headline reads "IW will allow chickens, but they must be 'documented' " Granted, this headline is below the fold, but that doesn't make it any less important than the other articles on the front page.

Documenting chickens is the result of some passionate pleas by local citizens to keep chickens in their backyards. Certainly there is a bit of tongue in cheek sarcasm in choosing this description, but the locals take it very seriously. As towns try to figure out how to expand their tax base, whether it be by pushing new industry in a corner of the county, or trying to add hundreds of high rise or low rent housing units in available space, there is the competing desire to maintain some resemblance of rural / agricultural life that the area has been known for during the last 300 years. The tussle over keeping chickens in something other than a farm setting has become the battle cry of these normally quiet citizens.

"Cried like a baby" when a hawk wiped out his chicken flock, said one chicken owner. "They are my companions. I do talk to them." was a comment made by another. "A stress-reliever" was a positive tribute given to these 2-legged creatures.

Just to have to discuss having "illegal" chickens in one's yard brought on stress, not to mention having to explain to the children how their favorite pets might have to be removed from their property.

And now if you want to use politically charged rhetoric and characterize chicken lovers as gun-totting vigilantes who would protect their flocks at all costs, it would bring the discussion to a new low.

I don't know if sanity eventually took over, but the Isle of Wight (IW) Board of Supervisors voted unanimously to allow up to 6 chickens in certain residential backyards, no roosters allowed however. This rooster exclusion is not without merit (and let's not make it a sexist thing). Roosters are noisy, and would gladly poke your eye out given a chance, and basically do nothing to help the egg-laying benefits of chickens. There is a problem here though, and that is Tractor Supply or Farmers Service do not guarantee the sex of the chickens they sell. So if a rooster develops, an axing in the dark (so PETA doesn't get uptight) may be the only solution, but a good coq au vin recipe might be the way to arrive at some benefit for the slaughter. 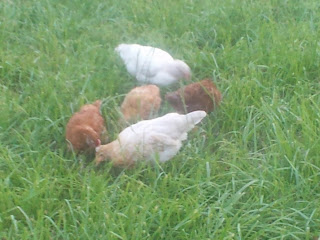 The good news: one can now obtain a zoning permit to have chickens (permit fee is waived.....hoorah!)

Posted by Dave at the Vineyard at 7:39 AM