You  may  think this is a rather odd time to bring up winter injury, but as I mentioned in the last blog, we are constantly walking around the vineyard and inspecting, touching, and analyzing what we see in order to make changes or adjustments which get us closer to our ultimate goal: perfect fruit.

Even new workers and helpers are advised to bring to our attention anything that seems unusual from their day to day observations. Lets face it, after pruning a couple of rows of vines, even a novice can see a bug, or a different colored leaf, or a mechanical failure and be able to decide that something is wrong. As part of my instructional dialogue, I explain to them that this understanding of differentiation is what divides man from orangutans. Nothing convinces them better right up front to be more observant than the possibility that they might be called a monkey if they don't spot something odd. And every time something different is brought to my attention by these extra set of eyes, it is an opportunity to instruct and teach....it makes for better employees.

So we walk the rows, grabbing samples of leaves that are compared against resources I have for IPM (Integrated Pest Management). Whether it be insects, diseases, or chemical disorders, we can generally get fairly close in our diagnosis. Sometimes it leads to a change in a chemical cocktail we spray on the vines, other times it may mean altering the timing of an application or defining a needed nutrient to apply that the plant is lacking.

But one of the most perplexing problems we have recently spotted is what I call "Sudden Death Syndrome".  An otherwise healthy vine, with plenty of leaf structure and sometimes a full array of grape bunches, just out and out dies for apparently no reason. 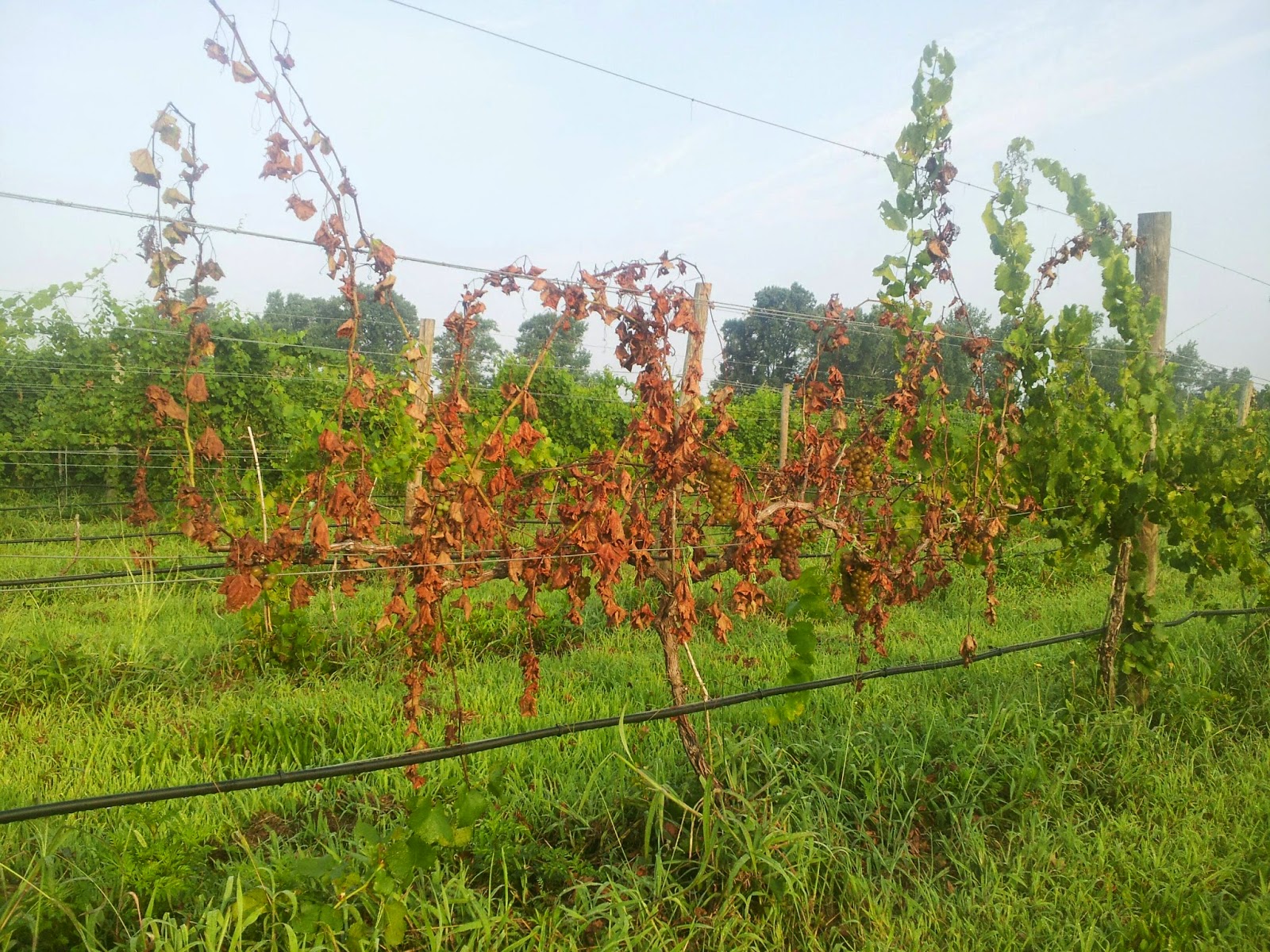 You first think that the trunk sustained a major injury, which would lead to an immediate lack of water and dehydration. We had this problem years ago when I tilled our Nortons and found out, albeit a day late, that the tiller was cutting through the major root structure that had advanced near the surface of the soil instead of reaching down out of the typical tilling path.

This was not just a single occurrence. For those one time events you get to the point of brushing off the problem and blaming it on nature taking its own course. A lot of attention worrying about a singular occurrence is not very productive. However in this case, we lost dozens of vines throughout the vineyard. They weren't the older vines with solid trunk structure. These had smaller trunks, maybe less than 3/4" in diameter. And our losses were within all the varieties, though the Viognier, the Petit Verdot, and the Cabernet Sauvignons were the hardest hit all showing identical symptoms.

I sent pictures off to Virginia Tech to see if they could identify what the primary cause was. Their immediate observations were similar to mine: "Was there any trunk damage?"  They also hinted at cold injury which we both ruled out because, relatively speaking, our winters down in this coastal part of Virginia don't get that frigid to create this kind of damage. However, we were too quick to dismiss this possibility. My final conclusion is that it was an injury sustained by winter snow and cold. You see, initial Spring growth  begins by a mechanical uptake of water and nutrients in the xylem cells (though not a direct comparison, think of these as being like the rings you see in a tree trunk), but as development continues, the woody portions lack the live cambium tissue that was killed during the winter but is required to transfer these needed nutrients. The vascular cambium is the region that produces new phloem cells (those just under the bark) and the xylem cells. Without a replenishment of these cells, the transpirational (think evaporation) loss of water from the leaves exceeds the ability of the damaged vascular system to transport water. Hence you can understand why our immediate suspicion of trunk damage had the same symptoms as this winter injury.

With all this being said, it meant that there was very little we could do to have prevented this. Some of the vines had new base shoots this season, and we will use those to replace the dead vines. Others however show absolutely no sign of life, and these we will slot to be replaced in the Spring of 2015.