There are few bugs in the field that get you up in arms quite like the Japanese Beetle. Most just take a bite here or a bite there. Some, like the honey bee and lady bug are actually helpful in as much as they pollinate or are predators which search out and eat harmful bugs. But the Japanese Beetle is the terrorist within the vineyard. Throughout the winter months and well into the Spring, the vintner has convinced himself that this must be an off year for the Beetle; nary a sign. But keeping to a yearly routine, June 1st is when they raise their ugly head and soon thereafter you'll see one or two. 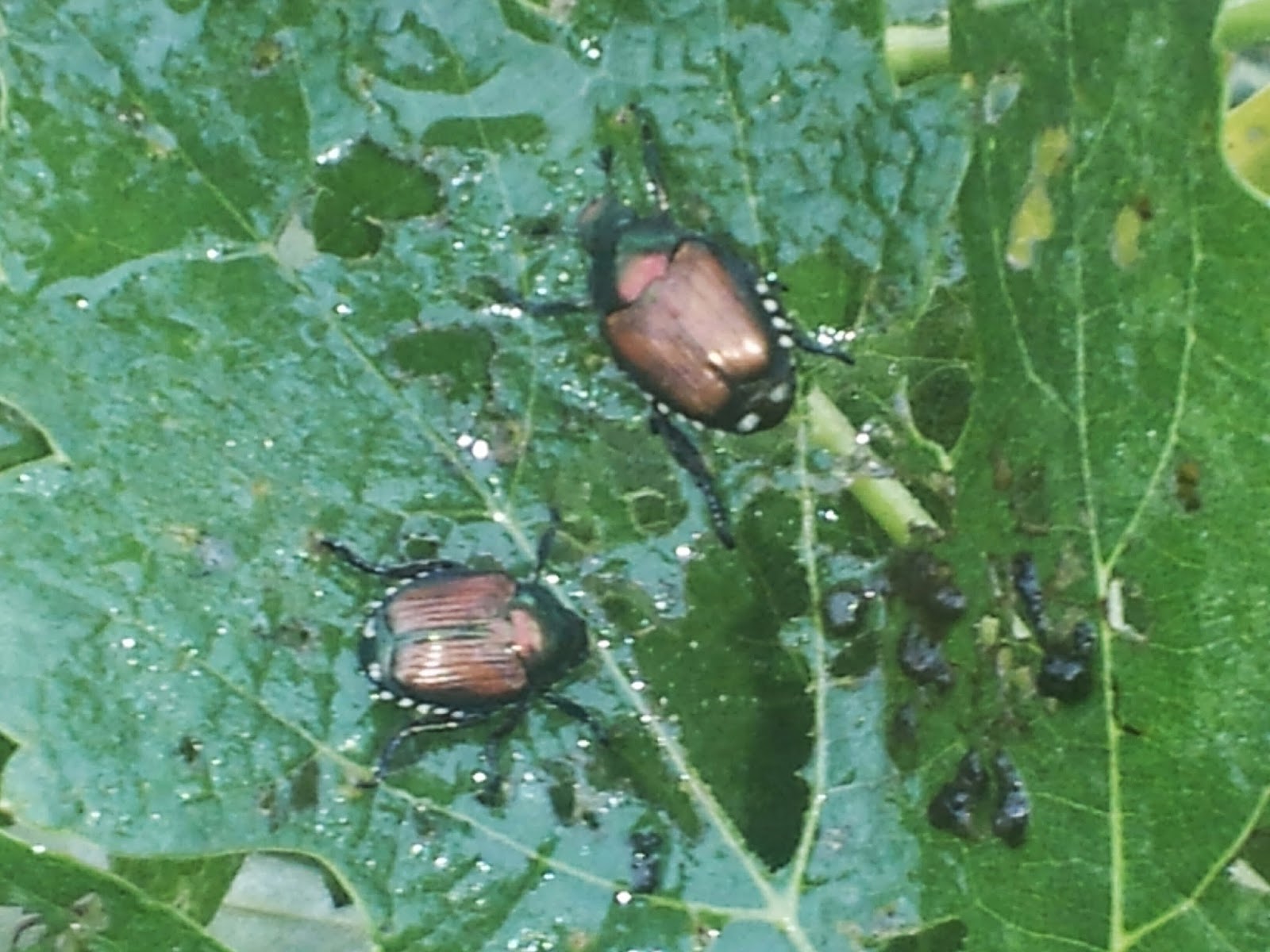 In a previous blog I mentioned that we had insect traps set up around the vineyard looking for signs of 2 particular grape pests. All of the traps have come up empty, meaning the Japanese Beetle is our #1 problem this year. It usually is.

Chemical warfare is not to be taken lightly. Putting aside the "Greenies" who believe that nature should be more closely involved in controlling insect pests, the fact is that there are no known predators of the Japanese Beetle that can make a difference when the need arises. There are some wasps and ants that like to eat larvae, but that doesn't stop these beetles from flying in from adjacent pastures to eat their preferred food: grape leaves. There are these pheromone traps you can buy at your garden center, but all they do is attract the beetles from outlying areas; not something you really want to do. And besides, they would be filled before you reached the other side of the vineyard.

It is said that a grapevine can lose 10 - 15% of its foliage before it starts to affect the health of a plant. The dilemma lies in the fact that Japanese Beetles are gregarious, meaning that hundreds of them may sit on a particular vine eating their way though the upper canopy leaving nothing but a skeleton behind. For a small vine without a lot of leaf structure, this can be deadly. And for an older vine, this loss of photosynthetic ability may affect the fruit.

There is a concept that vintners use called Economic Loss Threshold. Like the name suggests, the vintner will hold off on applying costly chemicals until he believes the expected loss will exceed the cost of preventing that loss. So he waits, and waits, until he finally can't take it anymore and it forces him to add an insecticide into his spray regiment. Each application costs $160.00 With honeybees in the area added considerations must be made to reduce the negative impact on their populations. Day before mowing (to remove flowers on neighboring ground plants) and early evening spraying (hoping the bees are back in their hives) now enter into the scheduling of these lethal sprays. They are non-selective; anything with 6 or 8 legs will be toast if contact is made.

Sevin XLR and Carbaryl 4L are the insecticides of choice. Neither is available for the casual gardener, though some Sevin can be found on home store shelves. I suggest against using the Sevin powder unless it can be put only on the leaves on non-flowering plants (that wouldn't attract the bees anyway), because with morning dew the powder can stick to the legs of the bees and be transferred into a hive and cause its damage. Dried liquids have a reduced chance of being transferred and carried.

I can attest to the effectiveness of these 2 insecticides. We had been on an every other week schedule with our insecticides, starting in the last week of May. Into about mid-July we thought we had our bug situation under control, when I missed an insecticide spraying. My excuse was that I didn't have any in stock when my scheduled spray day came along. Anyway, this past week, the 3rd week in July, from my own observations and from field reports from our other fields, we were being inundated with Japanese Beetles. Tens of thousands of these bugs were everywhere. The Cabernet Sauvignon were horribly attacked. So going out one evening I applied a 1/5th dosage application on the leaves (that's all I had left), and the next day I saw only 2 beetles (1 dead, 1 alive) that managed to not fall to the ground in a death spiral after they were dosed.  I cross  my fingers that we got to them in time.
Posted by Dave at the Vineyard at 2:26 PM