Beauty and the Beast

Whenever you buy a "Dream House" there tends to be a blind eye as you go through a period of visualizing living in this stately mansion. Rooms are just too many to comprehend, hallways and doors make orientation just a bit confusing. You manage to avoid looking at things that will become fairly important and you miss things that add some additional charm and personality to the property.  No, I didn't find out that the plumbing doesn't work or that there had been an electrical fire. Neither of those things occurred. And it was abundantly clear from the beginning that animals owned by the previous owner were not kept very well, and after three months I have to some extent been able to remove their memory and territorial markings.

But these things take time to learn about, and right now Plan A is to put my efforts into the vineyard. However with that being said one needs time to just back away and change the routine or you will get both mentally and physically exhausted.

For a farmer, and I must accept that title, which is what a vineyard worker ultimately is, the work never really ends.  It is a sun up to sun down job. You never know exactly when it will rain to plan a day off from the fields, and even then there may be equipment repairs or other work that is required indoors even if nature is telling you to take a break.  What I have done is to redefine the weekend to see if I can bring some normalcy to my rigorous schedule.  I have decided to use the weekends to catch-up on required projects not yet finished from the week, and hopefully this may not extend beyond Saturday noon, and then spend the remainder of the weekend putting around the house by being Mr. Fix-it or just tackling a pet project. Of course there have already been major violations to this type of planning.  Mowing the lawn and between the vines takes about 8 hours in each of our two locations, and with the dew so heavy in the morning this generally is spread out over four days. If it has been rather rainy this could be a once a week affair.  The other "must do" assignment is to adhere to a spray schedule, which could be putting down fungicides or insecticides every 7 to 10 days.  My experience  has been that if this isn't followed you will really regret it by Japanese beetle onslaughts or black rot attacking the fruit.

So this may appear that there isn't much time in my weekend, but you make do. 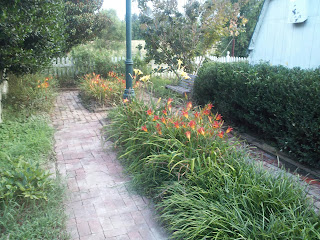 One of my most recent projects was to recover the brick walks that surround the house and meander by the herb garden, old chimney, spring house, and backyard. As with all open bricks weeds find any little crack and grow, and after awhile you don't even know there is a brick path there. Some hard scraping though, digging the edges, and an ample application of Round-Up brings them back to life, and wouldn't you know it there is a hidden flower garden tucked in the corner of the yard with a reading bench should you want complete solitude, making exception to the bugs and butterflies that enjoy the flowers too.

With every ying there is a yang, and adjacent to this peaceful area there is a swimming pool, aptly called THE BEAST. This poor pool had been neglected and was full of green pea water and scum.. Local frogs and toads had taken up residency, and there is no doubt in my mind that if I accidentally fell in it might take a year to find my body.

We first went at it with the unusual hope that if you add enough shock treatment it would eventually come around. It wasn't the case however. Spending nearly a hundred dollars on chemicals, having the sand filter and pump work overtime, and manually skimming the surface only got us to make believing that we were making progress. It was time to surrender, and just pump out the water, all 35,000 gallons of it, and start over. Fortunately I had a new irrigation pump I could divert from its rightful purpose of watering the new grapes (we have had plenty of rain to balance out this assignment so I wasn't concerned)  and with a few simple hook-ups I put a 2" pipe down to the bottom of the pool and starting sucking up all the sludge.  As much as green pea & ham soup was a winter favorite of mine, it may be several years before I lose the memory of how this pool invited me to otherwise pleasant surroundings. 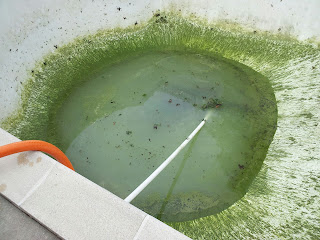 So now a simple task, where all I wanted was to jump in the pool at the end of a long hot day, had now developed into a major task. Drain the water, pressure wash the pool, scrub the insides with muriatic acid and TSP, paint the pool, refill, repair pool fittings, scrub the decks and repair certain concrete blemishes, and remove vegetation growing through the fence. This has now gone beyond a casual to-do list on a weekend. To be able to jump in my pool before Labor Day will be a major endeavor. But stay tuned......hopefully I can show you the results of being side-tracked.

Posted by Dave at the Vineyard at 7:10 PM