We are about a third of the way into the new season, and I am finally getting around to making a post. Skipping through the basic "we do it at the beginning of every year" stuff, I have decided to finally settle down and bring everyone up to speed on the oddities we have encountered this year.

In my transition piece I talked about finally selling my plastics business, and now I am down on the vineyard, and new homestead, full time. It allows me to at least make a solid effort in keeping up with the requirements of the vineyard, though I may never catch up since I had a late start beginning in mid-April. It also provides me opportunity to tie up alot of looses ends, and try to resolve issues as they come along, and there have been many.

One of the main things I had to devote some attention to was a year long battle with an ex-employee who decided to break in to my house and trash the place. To really make a long story short, he had just gotten out of jail (nice ex-employee, huh ?) on another matter, and having burned every bridge he crossed he was thrown out into the street without a friend or a dollar in his pocket. OK, he probably had a dollar, but whatever he had went to beer and smokes. At the time, and now we are talking in the Fall of 2010, I was on my odd schedule juggling work in Massachusetts with my farm duties, and he knew this. It made my house ripe for the entering. He ate my food (no big deal here yet), but he drank all my cooking wine which very quickly exited his system. Unable to control his bodily functions, having been off of booze for 6 months, he proceeded to mark the territory. What a mess.

Through my personal police work, getting DNA samples, and prodding our local police force to get a warrant issued, he was finally caught and "brought to justice".  I was issued a subpoena on a couple  of occasions to show up in court, but he rolled over like a dying mule when he saw we had him cold, and I was in the court to see that the proceedings went smoothly and never had to be called to testify.

One of the things that bothered me most was that he targeted my home, which I wasn't too pleased when knowing I was the only one who gave him a job, but also that the incident removed that nice, trusting charm of the rural south. I could go on and psycho-analyze the whole thing (well I did, I just won't bore you with it here) , but I'll just conclude this sad chapter saying I now subscribe to ADT. The time to get ADT is not after the crime is committed. Where have I heard that line before ?

In previous write-ups I talked about this year's plantings, and that didn't all flow so well either.  I wanted in the worst way to plant 1500 Gamays (think Beaujolais), but the graftings didn't take this past year so I had to change at the last minute to another variety, so I chose Malbec. This is another one of those Bordeaux grapes, which puts us at having 4 of the 5 being grown in our 2 vineyards. The only one we aren't growing is the Merlot, which everyone else seems to be growing since it was a major fad a short while ago. What this means is that there is plenty of this grape available to purchase should we decide to make a Merlot wine.

The Malbecs came mid-May and with the help of a couple of local young farmers we were able to bang in all the poles and then plant the Malbecs without any problems, albeit one major one. I had ordered 700 of the line posts and 90 of the end posts, only to get just the line posts. What is important about the end posts is that they are required to tie in the irrigation system. Without them all the drip lines and wires are just hanging without tension or hook-up. So far though we haven't had a problem with the weather. We have had plenty of rain and the Malbecs, as well as the newly planted Scuppernongs and our vines at the other vineyard are all doing well. We have had so much rain however that we are fighting black rot and powdery mildew which is a challenge every year, but more so this year.

Diane and I have close to 73 aces now, with about 10 in grapes. Doing quick subtraction it leaves us with about 40 acres that is considered farmable, and being a financially - centered guy I can't see having a resource doing nothing at all, so I lease the open land out.  This year I am working with 3 new farmers (not really new, new......they have each been in the business 30+ years) because I really pissed off the farmer I had previously leased to......but that is a blog entry all its own. So my other land is being used to grow peanuts, soybeans, and raise Angus cattle. It's all pretty cool stuff  if you are into farming, and I must say I've got the bug. 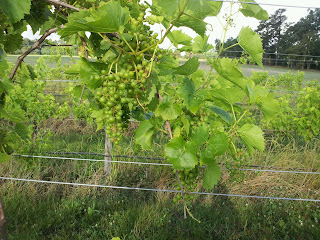 That's the quick update. I have much more to catch up on, with the winery being designed and the new house getting a boatload of attention. But they deserve their own entries, so stay tuned !
Posted by Dave at the Vineyard at 5:16 PM