This has been a very tough year

As the title suggests, 2018 will go down as the year where our willpower has been tested, and whether our backup plans were solid enough to carry us through the tough times. Now that our harvest is officially over, I can look back at how the year started, which wasn't good.

I remember Rich telling me in the late Winter months how he didn't like what he was seeing in the vineyard regarding vine death. Instead of getting really bummed or excited, I just decided that I was going to wait for Spring to come around and then see what buds popped up and that alone will determine how devastating the winter had been.

For me I was pruning the Scuppernongs right in front of the winery. For this native American variety, it takes 10 plus minutes to prune each one, so to go through them all meant I was pruning right into March. A cut here and a cut there saw sap flowing like no tomorrow. If it was a maple tree I'd be collecting buckets upon buckets of sap for syrup processing. I eventually finished the pruning and then it was wait and see time for the buds to begin swelling and eventually open up.

February is way too soon to think the harsh winter temperatures are behind us, and wouldn't you know it we had a couple of freezing nights in March that caused major winter kill. It didn't matter  if the vines were well established and 5 years old, or were small vines going into their 2nd or 3rd year. Once sap flows, the plant cells expand and bloat, and with a quick freeze all of these cells explode. Two inch thick trunks split, cordons and canes immediately died. All of our French varieties got slammed, and even our Scuppernongs were severely affected. Very few of our French survived, with just a handful getting some kind of renewal growth above the graft. The Scuppernongs managed to go through major recovery by developing new shoots originating from the root area where grafting isn't an issue and therefore they were on their way back to becoming fruitful vines, albeit 3 years before we see any positive results.

All in all we probably lost 60% of our vines, and even those that managed to survive, such as our Nortons (another American grapevine) and our Seyval Blanc (a French-American hybrid) gave us reduced yields when we finally came to picking. Such is farming I guess. Unlike row crop farmers, we are dealing with perennials here that take years to get to a commercial harvest level.

So we started picking our Seyval Blanc grapes back in mid-August and waited a few weeks for the Nortons to get ready, which primarily means letting them hang as long as possible to accumulate sugars. Those we started picking on September 8th, which was about the same time they began tracking Hurricane Florence in the Atlantic. Just 2 years ago we had left some Norton grapes on the vines to ride out another hurricane and ended up losing them all. We weren't going to risk it this year, especially with the weak harvest we were going to get. All hands were on deck to make sure the grapes were completely pulled before the winds and the rains came through. On Wednesday September 12th the last of the Nortons were collected, and less than 2 days later Florence hit. Not as hard as we were expecting (the Carolinas got hammered), but we were just glad the harvest was behind us.

Thank God for "Plan B's" It seems like Plan A never comes into being, so I might as well just make sure Plan B can be managed and executed as efficiently as possible. In our case we knew that we wouldn't be getting all the grapes we needed to meet our winery demand. Our wholesale business is doing fairly well and we needed not only to provide wine for our tasting room but for our outside merchant customers as well. So months ago I began searching for vineyards with excess grape output and put my bids in to purchase grapes from them. I took one trip up to the Winchester area (about a 3 1/2 hour drive northeast of here) to pick up 2 tons of grapes. And just this past week, one day before the Hurricane hit, I drove 5 1/2 hours west of here to pick up 3 tons of grapes from North Carolina. 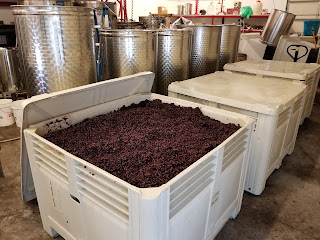 All of these grapes are now being processed, along with our own, to begin the journey towards making the wines we need for Spring (or slightly later) release.

Based on what I just wrote, it seems like there was a strart, and an end, with nothing in between. Couldn't be further from the truth, but those stories will be continued in my next post.
Posted by Dave at the Vineyard at 3:12 PM