CAUTION: Don't try this at home

The title of this post is a bit of a stretch. Most people don't have a bull at home, and I doubt if my experience can be applied to an oncoming doberman who has your neck as a target. But let me explain.

October is the month where everything seems to come to a close, at least as far as the vineyard is concerned. Our French grapes are all picked by now, and our American grapes traditionally take the better part of October to be brought in. This year, with the growing season beginning a couple of weeks early, our picking has tended to be pulled up also. We just finished harvesting our Scuppernongs just this past Friday (October 13th) and that pretty much wraps it up. Our minds now are focused already on 2018, where we are putting down 16 tons of lime, followed by some fertilizer, and eventually working ourselves back into weed control and pruning.

However, when it comes to the animals Fall is a time for babies to be born. Our 3 female goats were introduced to a buck back on Memorial Day, and for those that entered our contest at the winery to guess the birthdays for our new arrivals the gestation period was probably the most Googled question prior to jotting down one's name on the calendars we have put up on the wall. As of today (10/16) we still haven't any new kids on the block, and there are still some dates without guesses.  Come to the winery and place your bets....prizes to be awarded to the winners. And I will say, Adrienne is HUGE.
Nigerian dwarf goats tend to have twins, so we'll see how many we get when they have all come to term.

We have also been expecting many of our cows to have some offspring too. A40X which was born on our farm back on October 24, 2013, was the first to have a calf this year on September 25th. It is her 2nd here at White Oak Farm. A sprightly little thing....big ears, long legs and the facial expressions of her mother. It will be dubbed E40A. 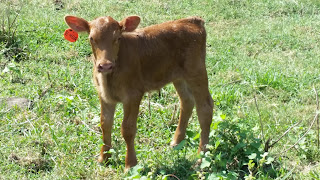 Even though this is the only cow that'll let me scratch her head and ears, I give her plenty of room. Maternal instincts far outweigh prior friendliness. When the calf is curious enough, and confident enough in her escape capabilities she will approach me. Until then I am fine with the distance between us. However, my keeping a distance doesn't seem to apply to the other cows.

I was maybe 100' away from all of them, just standing minding my own business, just watching the herd, anticipating the next newborn to be soon on the way, when the cows slowly started approaching me to see what I was looking at. This is not uncommon. Sometimes they are pleasantly surprised when I offer them some sweet corn. But most times I am doing nothing other than watching their behavior to observe if they are healthy, or if an expectant mother is slowing working her way over to an adjacent field to be left alone.

On this particular day though I was surrounded by 4 cows, 2 heifers, and a calf, when all of a sudden the bull came racing towards me in full gallop (do cows gallop, or is that just horses?) and force. This is not the "baby" bull I added to the herd back last December. This has become one mammoth bull made up of nothing but muscle.

Not having time to reflect on life as I knew it, and recognizing that there was no way the cows would block for me or that I could out run it, I did the only thing instinctively that I could think of.

I put my right arm out, with my hand at 90 degrees and with fingers stretched to the sky. I yelled as loud as I could STOP!!!!!!  Well, it's a good thing(for me) the bull's front brakes worked, because it stiffened it's 2 front legs skidding to a halt not 5' from going right through me. 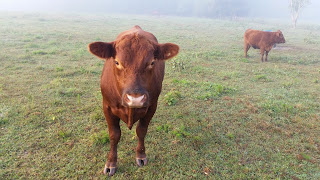 With that brush with death, I slowly backed out of the crowd, and walked away thankful to see another day. 2000 pound animals are not pets; I must never forget that.

Posted by Dave at the Vineyard at 2:16 PM