Our Goats are in the Entertainment Industry

I don't know if I represent everyone else out there, but on my cell phone I have managed to sign up for a few news apps to keep me "up to date" on the latest happenings. I have Flipboard, and Play Newsstand (my personal favorite), and I used to have FoxNews but I just couldn't take it anymore. Even I have my limits on being flooded with conservative-leaning rhetoric.

And in signing up for these, they think they are helping out by asking us what some of our news preferences are, so they can appropriately feed us "the news we want to know". I didn't check nuclear war so I hope they feel they can interrupt whatever I am reading to fill me in on some other important stuff.

Well, it appears that I signed up somewhere for "farm animals", because at least weekly I get a story about some innocent passer-by who was killed or trampled (generally that leads to a similar end) by a cow. Having 7 of them myself, ranging from 500 to 2000 pounds, I can attest to the fact that getting on the wrong side of one is not a welcome sight. I have had mother cows charge me because I was tagging their newborn calf, and have been head-butted more times than I can count. It takes an idiot to think they can out maneuver or out run a cow. Better to back off and retreat and be able to talk about it than hold one's ground and find out you'll be 6' under after the wake. But this isn't a conversation about cows, though I tend to use stories about the dangers of huge livestock as a way to convince people that farming is one of the world's most dangerous occupation.

This blog is about goats. I have been inundated with stories lately about how goats are taking work away from union workers, and that formal grievances have been filed to stop goats from union busting. If you think I'm kidding (no pun intended), here are the stories:

Now some of these stories go into quite some detail. One writer, Christopher Ingraham of the Chicago Tribune, even did a very thorough, back of the napkin analysis about the number of goats that would be required to remove the weeds from a plot of land when compared to a union worker (the answer was figured to be 3600 goats over a month's time equaled one worker  - construction machinery required, to clear 360 acres). Now the fact is that there are very few temp. businesses who manage that many goats, so if there is any real time issue in wanting to get the job done, goats are probably not the answer. But like nearly everything else, if you want to find goats to clear land, Google "Rent A Goat", or, for Pete's sake, go on Amazon under home services. I'm not making this stuff up.

And then one has to remember that what goes in needs to come out. So if weeds were the problem before, 3600 pooping goats might create an unforeseen consequence. In fact, according to the Town of Salem, Oregon, they fired their goats because they were (1) non-selective in what they ate, (2) cost too much, and (3) left behind too much fertilizer. Duh.


One of the writers went so far as to imply that the union didn't mind a little competition, what they objected to were the goats working through lunch. Oh, I meant to say that the goats took an extra-long lunch and don't do any real work themselves anyway.......hmmmm sounds like an otherwise familiar problem.

So anyway, in the interest of preserving the status quo and assigning all weed-wacking duties to humans, I have kept my goats fenced in and prevented them from wandering around in the vineyard where they would cause nothing but mischief anyway. They are, after all, really entertainers for those that come to the winery and want to see goats climb up and down the goat tower, do funny jumps, and beg for food nuggets (they are well fed regardless).

Oh no....maybe I have to worry about the Actor's Guild getting all pissed off now? 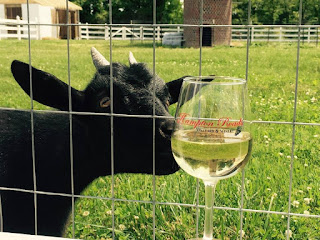 Posted by Dave at the Vineyard at 2:36 PM