Winter Is Behind Us 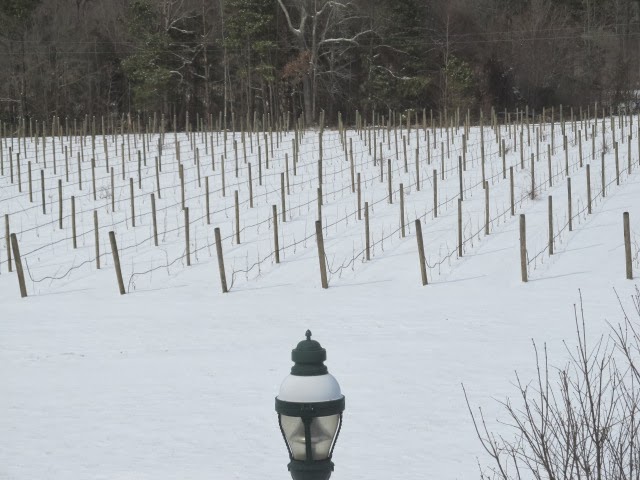 As I write this I am looking out of the same window where I took this picture just a few short days ago. The ground is clear now, and the temperature is predicted to be 67 degrees by Wednesday. It is now time to play catch up in the vineyard. I still have plenty of dormant pruning to do, which was side-lined as I spent my winter chasing after cows and putting up electric fence. There is much to do in the vineyard other than just pruning. I have 2 rows of vines that were flipped during a hurricane and all those posts are in need of replacement. The irrigation system has been compromised by the severely cold temperatures we had, which caused ruptures in lines where the water wasn't drained fully. Several of our hydrants cracked too, so I need to dig down to the water lines and replace the junctions with underground cutoff valves, which hopefully will prevent a repeat in the future.

We are also gearing up for the Winery to be built this year. The ground is a little mushy now, so it is still too early to bring out the heavy equipment. All goes well we can be starting the actual foundation work in May. It'll be a 4 month project. Getting the place geared up for visitors and tourists has its own priority. Making the winery and vineyard family friendly takes on a mission of its own.

It is more work than Diane, Rich, and I can take on all by ourselves. I am posting internships for those that want to learn about the process.....vineyards, new business venture, tourist attraction, small-scale farming....there is so much to do and learn for someone with an interest. We'll offer room & board and a small allowance.

Diane is still up in Massachusetts, having shoveled even more snow earlier today on top of the recent blizzards. I can hear it in her voice that the weather, and being away from our Virginia home, is wearing thin. Hopefully the house will sell early this Spring.