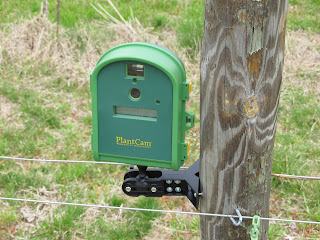 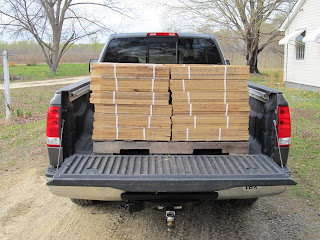 As I get older, just as ambitious but restrained in knowing what I am capable of doing in a short period of time, I try to choose one major project to finish while I'm at the vineyard. In a previous post I believe I talked about my new "toy" for 2012....an In & Out Tiller I purchased from Italy. This accessory is attached to the back of the farm tractor and allows me to till in between each of the grapevines and under the wires. It has a sensor on it that sends a microswitch signal to the heart of the machine, that then hydraulically retracts the tilling mechanism when it approaches a vine or a post.

In one....no many.....of my earlier posts I have complained how weeds seem to dominate my nightmares about the vineyard. Controlling weeds really is a big thing. Hopefully this new machine will calm my worries. But I'm getting ahead of myself here. The new tiller just arrived but is a few days away from being hooked up and ready for trial. What I have to do now is pound in 6000 stakes. You see, the tiller doesn't know a small vine from a weed. The grapevines planted last year are not sturdy enough to fend off a sensor, and the tiller would make mincemeat out of them if there wasn't a method to protect them. Hence the stakes.

I purchased 6000 oak stakes and picked them up in West Virginia on this trip down to the vineyard. 6000 stakes weigh somewhere around 1800 pounds and completely fill up the back of my pickup. Figure 2 full skids worth, each skid being 48" x 42" x 30" high. Talk about control issues on the drive down ! I felt like I was hydroplaning on the interstates, nose in the air and waving left to right as I pointed the truck south. Driving a little slower helped tremendously, and again I have to admit that it is with conditions like this when I finally obey the speed limits. 60 mph seems so slow !

Four hours after I left WVA I was pulling into the farm, tired as can be but prepared to now pound in the stakes when I woke up the next morning. Relatively speaking, the ground was soft, though it still took 7 or 8 hits with a sledge to put the stake in only 6". Each vine gets 2, one on each side of the vertical vine rootstock. When I finally get to till I will drive up one side of a row and drive back on the other. This makes for a nice 24" cleared area directly under the wires.

Until I get the tractor ready, there is very little more I can say about it. I am quite eager to see it in action, but in the meantime I have to pound stakes. As of now I've completed all the Cabernet Sauvignons. I have the Petit Verdots still to do....maybe 3 more days of pounding. Let's see.....that's 1000 vines, 2000 stakes, times 8 wacks each for a total of 16000 wacks of lifting a 2 1/2 pound sledge, which makes for a repetitive bench press(with one arm) of 40,000 pounds or 20 tons. Hope my arm has it in it !

My other new gadget, alot less expensive fortunately, is a time lapse camera. I've mounted it in Block 1 aimed at one of the more developed Seyval Blancs and with this I am trying to get a nice set of pictures showing bud break and shoot growth. I was worried that I might miss a good starting point but with all the cold we have been getting lately it looks like we will be getting a delayed bud break. I originally forecasted April 1st.....it looks more like mid-April this year. It should coincide with some replacement vines I have coming in right about then that will fill some of the gaps resulting from last year's drought and subsequent losses.

Diane is flying down this next week. Richmond is holding a big expo called Wineries Unlimited which she, as the winemaker, and I are attending. It is time to get serious now. We are most likely going to get our first crop this Fall and we now need to gear up with all the winemaking equipment. Not really a social event, it is wall to wall stainless tanks,pumps,filters,destemmers & crushers, bottling machines and on and on. Tie this in with getting a winery built next year and it looks like, once again, we will have our plate filled....or at least our glasses.
Posted by Dave at the Vineyard at 1:39 PM